Wow! So much has happened between my last blog posts and this one… I will get to that soon… but for now, I’m playing catch up. Welcome to our day in Egypt – which feels like a MILLION years ago!

Christmas morning has nothing on how I felt when I woke up in the morning to tour the Pyramids of Egypt. I can not begin to explain the awe driving up to that first massive structure…. but I will try! When our driver and guide pulled up to the pyramid, all you could do was look UP and your jaw drops. I’m sure he was giving us some good information, but I couldn’t even focus. All I could think was, HOW.DID.THEY.DO.THAT. The blocks are massive, the height is massive. The thing is just impressive. I couldn’t even imagine how those blocks were lifted. I know, I know, there are books and studies, and theories about all this- but I’m going straight to aliens. I see no other way. (Don’t roll your eyes at me, Dale I’m sure there’s some archaeological explanation…. but I’m stickin’ with my theory). We had the option of going inside the pyramid, but we decided not to because it literally was an empty chamber and no writing on the walls. We were happy enough to be like kids and climb up on the ancient bricks and imagine that we were the workers lugging these massive stones into place. My brain isn’t functioning enough to remember the details, but our guide, Mido was so knowledgeable about the ins and outs of the construction of the pyramid and why they were done the way they were. The math and physics of it all is astonishing. What I also didn’t know is that the pyramids of Giza were for one guy, well one family! The Pharaoh, his son and his sons son. There are also 6 smaller pyramids for the queens. Climbing on the pyramid and looking up just didn’t seem real. Our next stop was the camel ride to a spot called the “9 pyramid view” we were all a little nervous to ride the camels- but Uncle John’s death grip on his saddle was the best. My camel’s name was Mikey (remember the commercial! Hump Day! YEAH!), Zain’s was Humphrey, Mom’s was Casanova and Uncle John’s was hmmm, I don’t remember! We went out into the hot Egyptian sun, to have some incredible views of the pyramids and giggle riding the camels. After buying some little souvenirs, we got back in the van to see the Sphinx! At the risk of sounding redundant, it was so incredible that we were seeing, in person, the things we have only seen in history books. And again, wrapping my head around the fact that I was looking at something THOUSANDS of years old wasn’t possible. I mean, seriously, the USA is only a couple hundred years old and some change… these beasts existed well before our COUNTRY even did. Remember that history class in high school you slept through? Yeah, me either…. I so wished I remembered all I read about the ancient Egyptians and the history and such…. maybe that’s the key though to getting through to kids- making it real. Making learning tangible. Yes, I know we can’t take a field trip to Egypt… but I’m convinced we can do something more. I digress… that’s a topic for another time. Back to the trip….

After “kissing” the Sphinx we were off to the Papyrus demonstration where, of course, we had to buy cartouches with our names on it. It’s super cool because when I was in China, we bought Chinese calligraphy at a demonstration with our names on them… so buying this, although cheesy and touristy… I kinda like it. At least it’s not a t-shirt that has “I heart Egypt” on it… oh, wait, I have that for Cambodia. Haha.

The rest of the day was a bit of a blur. I know that we went to the site of the first Pyramid and to Memphis (the original capital of Egypt) and saw a massive statue of King Ramses II. Mido was super informative, he taught us how to read the hieroglyphics and gave us all kinds of history that was mind blowing at the time…. but, as my cousin Michelle says, you can GTS (google that shit) if you want more info. As the day was transitioning into evening, we were all wiped from the sun and Mido suggested that we pick up where we left off tomorrow (we had a few hours of time before we were to be on a flight to Athens the next day). We gladly accepted that suggestion and were excited to get to use the pool at our hotel after such hurried days of travel!

Getting back to our place, we quickly switched from desert and dust covered clothes to our swimsuits and jumped into a refreshing and gorgeous pool, with the pyramids looming in the background. Someone had the genius idea to see if we could get massages that evening at the spa- and turns out they had four openings. YAS! It was the perfect, relaxing ending to an incredible day of sightseeing 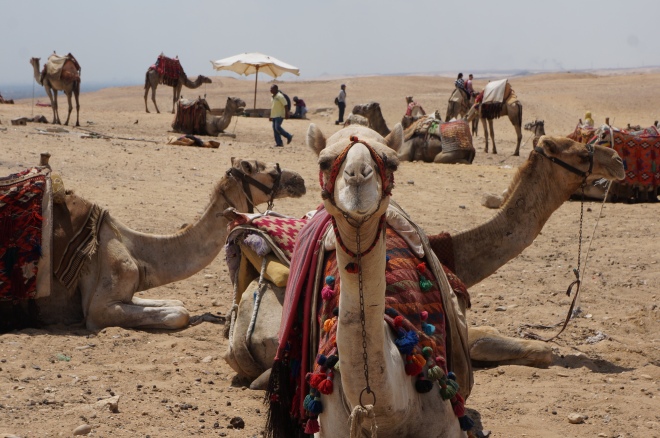 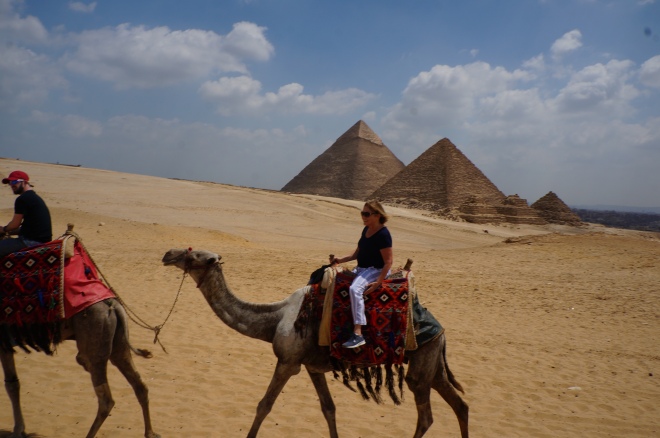