Corfu, you little devil, you

I didn’t detail my time in Corfu- but leaving the famous “Pink Palace” was tough, although my liver thanks me, I”m quite certain about that. From the moment I landed in Corfu, it was an experience- our driver, Socrates (no joke) was a little man who had either been drinking Raki all day and night, or had about 27 espressos that morning. I had come off of a tiny airplane (40 people maybe) that had been Island hopping from Zakynthos north to get me to Corfu. I was white knuckling it the whole way- those who know me know I hate to fly… yes, I realize the irony. Anyway. After the meditation I had to do to get me through three, yes THREE “up downs” I was a bit in a daze until I stepped out into the bright sunshine of Corfu. I spotted the Pink Palace Van and made my way to the van. Socrates was no where to be found- but another traveler, Mike was there and described the crazy guy to me. I figured I’d just stay put. Eventually Socrates blasted his way out the doors of the airport and said, “You no wait for me! Let’s go!” He had picked up another traveler and herded us all into the van to go.

I was Using the phrase “Bat Shit Crazy” inaccurately before this trip…. cause the people who have driven me places are the epitome of that phrase. Socrates drove like he was in the Indy 500, being chased by cops and auditioning for a spot with the crew in Fast & The Furious. Oh, and these weren’t like straightaway highways… this was up and over a mountain pass in Corfu. The three of us kind of looked at each other all at the same time and immediately put on our seat belts,shrugged and held on for dear life.

After the debacle in Zakynthos, I was bound and determined to make this hostel experience better. The girl at the front desk was helpful and gave me a room, which after seeing, I promptly went back to the desk, paid an extra $8 per night and upgraded. The original room was dark, damp, had a flickering flourescent light, threadbare blanket and was right outside the bar. Nope. Nope. Nope. All it needed was a cockroach to crawl by and I would have started crying again. But no. I calmly went upstairs and upgraded to a super nice room that had its own bathroom and a balcony overlooking the Ionian Sea. It had three beds, so I anticipated 2 roommates, but they never came so I had my own room for 3 nights! Score!

The Pink Palace, back in its heyday apparently was a legendary party hostel. While I was there, It was pretty tame in comparison, but that didn’t stop us from having a REALLY good alcohol-fueled time. Interestingly, they also have a pretty sweet set up designed to keep you there- they include both Breakfast and Dinner in the cost of your room, and my first night at dinner, I went down by myself and left with 2 new friends. As much as I’m sure you’re interested in the details of our evening’s events I’m going to go ahead and respect everyone’s privacy and just say that we all had a REALLY, REALLY good time. We had such a good time, that when my alarm went off in the morning, I said “Ughhhhh”. Sunlight was blaring through the thin drapes, and we had made plans to do an “activity” and head into old Corfu town to wander and explore. I mean, what better to help a hangover but 95 degree heat, bright sunshine, and climbing up an old fortress in a UNESCO Heratige protected city. Three zombies and I rode the public bus into town and wandered listlessly around- the three who came along were very patient with my mom-like enthusiasm climbing up to the fortress, looking at the views of Albania from afar, and the massive yachts pulled into port below. We sat at a cafe, had lunch and got into a cab to go back to the Pink Palace where apparently I got engaged to the Greek taxi driver. I don’t quite know what happened, but I’ll send you all an invitation to the wedding if it all works out.

We met tons of new people at the bar that night and I think maybe drank them out of vodka… All i know is that when I woke up my cheeks hurt from smiling so much. Two of the girls who were in the room next to me and I made it down to the beach to lay out and enjoy the Corfu sun, sand and sea. It was quite possibly the perfect day to just chill. We got up long enough to wander down to a beach bar and have some pizza and I was SO excited to get a watermelon juice (I hadn’t seen that on a menu since Thailand).

All in all, I was starting to see the light of traveling solo. I was leaving the next morning, and was so sad to leave my new friends- but I think this was the upswing I needed to get me out of the slump I had in Zakynthos. One of the girls I met even decided to take the 30 minute ferry with me to Sarande, Albania the next morning just for a day trip and spend the day at the beach! Corfu rocked my world a little bit. New friends, fun nights, lazy days… onward to Albania with a brightness in my step! 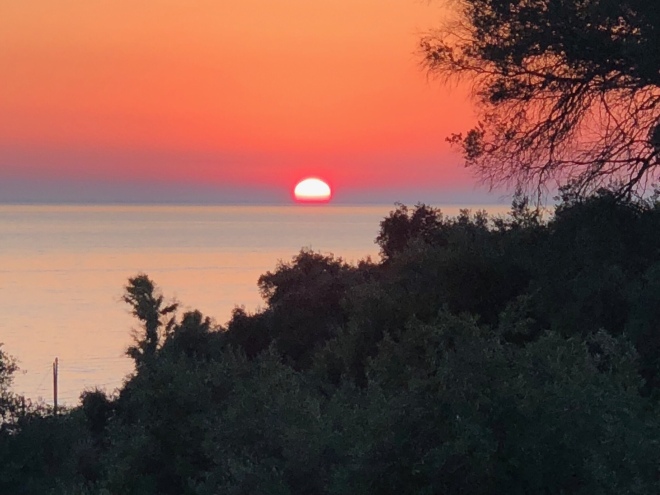 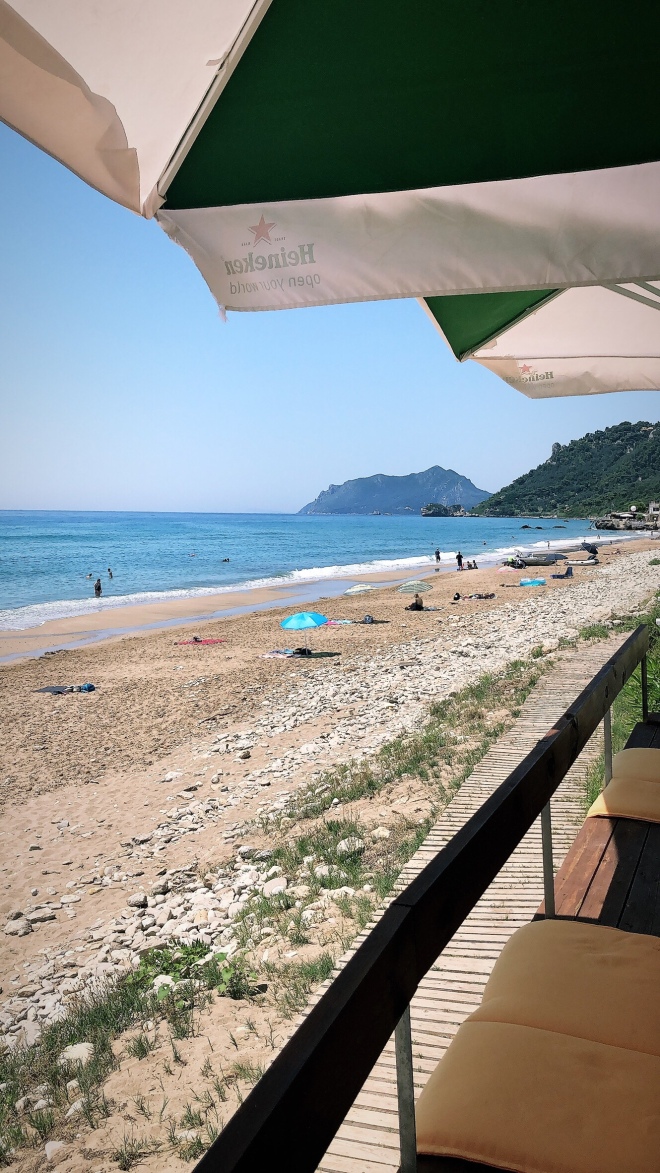